of the President of the Republic of Poland

Patronage of the Polish Composers Union

Patronage of the President of the City of Białystok 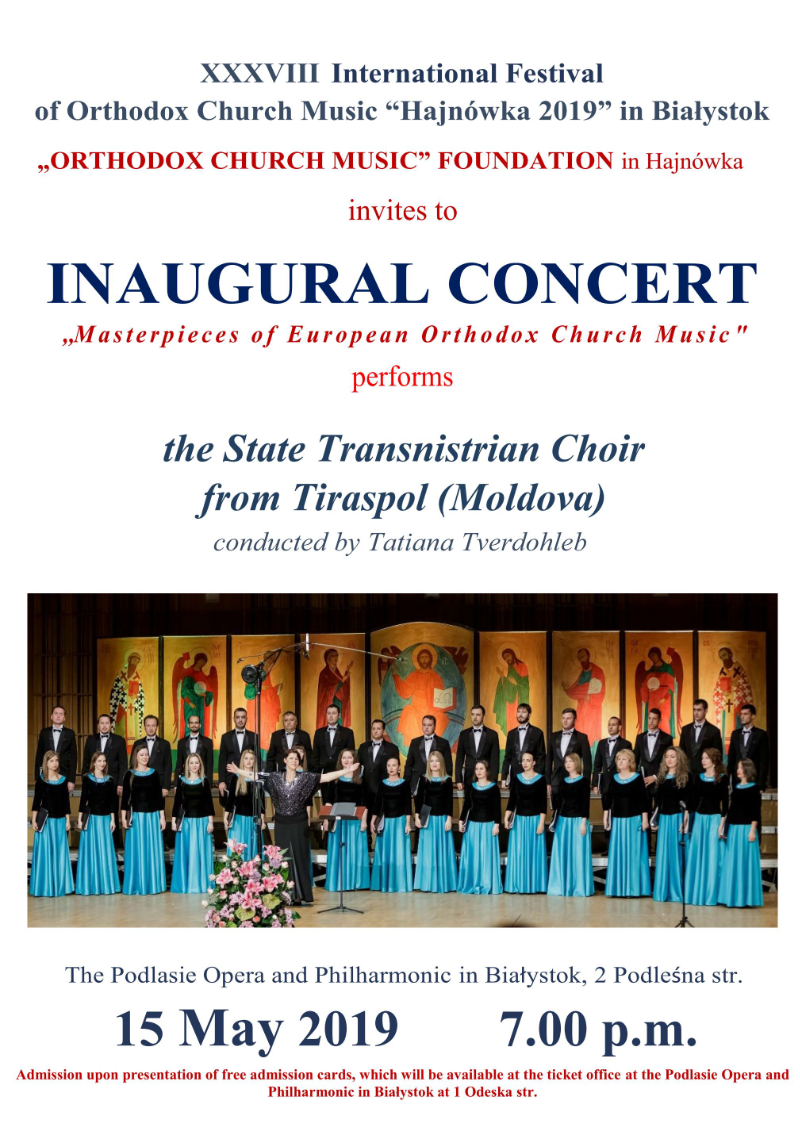 of the XXXVIII International Festival of Orthodox Church Music

Place: The Podlasie Opera and Philharmonic in Białystok, 2 Podleśna street

9. Choir of the Music College at the State Conservatory – Moscow (Russia)

CLOSING OF THE FESTIVAL

– Admission to the Inaugural Concert – upon presentation of free admission cards, which will be available at the ticket office at the Podlasie Opera and Philharmonic in Białystok at 1 Odeska str.

– Admission to the Gala Concert – upon presentation of paid admission cards, which will be available at the ticket office at the Podlasie Opera and Philharmonic in Białystok at 1 Odeska str.

Information about the Festival

During the Festival orthodox church music is performed by the choirs regardless of their nationality or religion – we host not only orthodox church choirs, but also catholic, Greek catholic, protestant, old-believers’, as well as muslim, buddhist, jewish. The openness of the Festival, the variety of repertoire and cultural diversity is an example of mutual respect and tolerance, confirming the idea of the Festival as the Musical Forum of East and West.

The aim of the International Festival of Orthodox Church Music “Hajnówka” in Bialystok is to present the great artistic and spiritual values of Orthodox Church music. Its program also creates opportunities for discussions, meetings, exchanges of experiences and forming new relationships between participants from different environments – thus enriching its aims with aesthetic and educational objectives.

Choirs participating in the Festival`s competition are judged by an international jury in the following categories: amateur (parish and secular), children and youth, music academies and professional. In 1995, the Ministry of Culture and National Heritage qualified the International Festival of Orthodox Music „Hajnówka” in Bialystok to the musical art events at the highest level, giving it a „zero category”, same as International Fryderyk Chopin Piano Competition and thus the most famous Polish world music events.

We recommend varying up the repertoire in its historical cross-section, as well as using contrasting tempos, dynamics, and forms.

Any changes in the repertoire can be reported until 15 March 2019.

a) phonetic titles and performance times of each composition
b) full names of their composers
c) a single copy of notes for each of the compositions included in the program.

of International Festival of Orthodox Church Music „Hajnówka” in Bialystok

Director of the Festival